Tides in poetry – single poems and collections. There are very many,  so this is just a pretty random collection as we find them.

New enteries are at the top. Scroll down to see earlier (important) examples.

This was published in 2012. A lovely book of poems very much about place, the sea, and the north.

We will start with these three significant collections of poems relating to the Severn Estuary – all published in 2009 –  coincidence?

This is a brilliant collection of poems about the Severn Estuary, and a life lived near it. It won the T. S. Ellot prize for poetry in 2010.
“A powerful and ambiguous body of water lies at the heart of these poems, with shoals and channels that change with the forty-foot tide. Even the name is fluid – from one shore, the Bristol Channel, from the other Mor Hafren, the Severn Sea. Philip Gross’ meditations move with subtle steps between these shifting grounds and those of the man-made world, the aging body and that ever-present mystery, the self. Admirers of his work know each new collection is a new stage; this one marks a crossing into a new questioning, new clarity and depth.” Source and more info here.From a review by Sameer Rahim“The Water Table, though it deals with a variety of subjects, continually flows back to the Bristol Channel, the rhythm of the tides and water’s physical and metaphoric properties.”The last poem, Severn Song, is on line in full here
Here is the fisrt stanza
The Severn was brown and the Severn was blue –
not this-then-that, not either-or,
no mixture. Two things can be true.
The hills were clouds and the mist was a shore.

A Sleepwalk on the Severn; Alice Oswald; 2009; Faber and Faber

Alice Oswald is one of  the UK’s most respected poets who has published collections of poems about various aspects of landscape and nature. Tides (and the moon) and the rhythms they bring to human and non-human life in landscape run through this book. 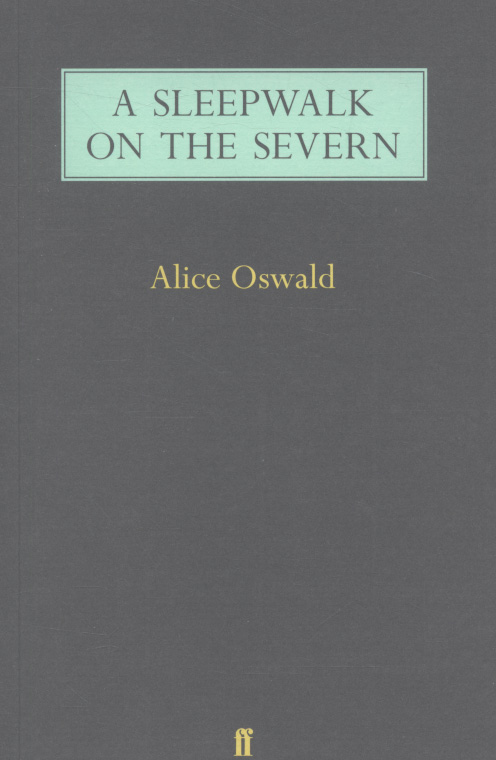 ‘This is not a play. This is a poem in several registers, set at night on the Severn Estuary. Its subject is moonrise, which happens five times in five different forms: new moon, half moon, full moon, no moon and moon reborn. Various characters, some living, some dead, all based on real people from the Severn catchment, talk towards the moment of moonrise and are changed by it. The poem, which was written for the 2009 festival of the Severn, aims to record what happens when the moon moves over us – its effect on water and its effect on voices.’

A Sleepwalk on the Severn is a poem for several voices, set at night on the Severn Estuary. Its subject is moonrise, which happens five times in five different forms: new moon, half moon, full moon, no moon and moon reborn. Various characters, some living, some dead – all based on real people from the Severn catchment – talk towards the moment of moonrise and are changed by it. Commissioned for the 2009 festival of the Severn, Alice Oswald’s breathtakingly original new work aims to record what happens when the moon moves over the sublunary world: its effect on water and its effect on language.’ Source and more ino here

“The drop of water on the tongue, writes Gillian Clarke, ‘was the first word in the world’, and the language of water is the element in which these poems live. Ocean currents create histories and cultures – the port cities of Cardiff and Mumbai; myths are born where great rivers have their source high in the mountains. A bottle of spring water contains the mineral elements of life; we can read the earth’s deep history in arctic ice. We share the rhythms of migrations in the pull of tides and seasons through rivers and estuaries.In her first collection since becoming the National Poet of Wales in 2008, Gillian Clarke explores water as memory and meaning, the bearer of stories that well up from a personal and collective past to return us to the language of the imagination in which we first named the world.” Source and more info here

This collection ranges over various aspects of water, but there is series of wonderful poems about the tides – particularly those in the Severn Estuary – Cardiff. The messages are deeply ecological, with warnings about what losses a Severn Barrage would bring – and the losses the Taff Barrage has brought. The poems are steeped in history and place.

Some of these poems are viewable in full on Amazon here

In 2008 Gillian Clarke was appointed National Poet of Wales and in 2010 she was awarded the Queen’s Gold Medal for Poetry.

The Moose, by  Elizabeth Bishop

From narrow provinces
of fish and bread and tea,
home of the long tides
where the bay leaves the sea
twice a day and takes
the herrings long rides,

where if the river
enters or retreats
in a wall of brown foam
depends on if it meets
the bay coming in,
the bay not at home;

where, silted red,
sometimes the sun sets
facing a red sea,
and others, veins the flats’
lavender, rich mud
in burning rivulets;

The tide rises, the tide falls,

The twilight darkens, the curlew calls;

Along the sea-sands damp and brown

The traveller hastens toward the town,

Darkness settles on roofs and walls,

But the sea, the sea in the darkness calls;

The little waves, with their soft, white hands,

Efface the footprints in the sands,

The morning breaks; the steeds in their stalls

Stamp and neigh, as the hostler calls;

The day returns, but nevermore

Returns the traveller to the shore,

I must go down to the seas again, to the lonely sea and the sky,

And all I ask is a tall ship and a star to steer her by;

And the wheel’s kick and the wind’s song and the white sail’s shaking,

And a grey mist on the sea’s face, and a grey dawn breaking.

I must go down to the seas again, for the call of the running tide

Is a wild call and a clear call that may not be denied;

And all I ask is a windy day with the white clouds flying,

And the flung spray and the blown spume, and the sea-gulls crying.

I must go down to the seas again, to the vagrant gypsy life,

To the gull’s way and the whale’s way where the wind’s like a whetted knife;

And all I ask is a merry yarn from a laughing fellow-rover,

And quiet sleep and a sweet dream when the long trick’s over.

Various versions of this can be found

It is a long lament about youth and aging with the flood and ebb of the tide as a persisting metaphor for that,  and the comings and goings of memory, place, power, beauty, wealth and so on.

The Old Woman of Beare said this when senility had aged her:

Ebb-tide has come to me as to the sea;
old age makes me yellow;
though I may grieve thereat,
it approaches its food joyfully.

There are three floods
which approach the fort of Ard Ruide:
a flood of warriors, a flood of steeds,
a flood of the greyhounds owned by Lugaid’s sons.

The flood-wave
and that of swift ebb:
what the flood-wave brings you
the ebb-wave carries out of your hand.

It is well for an island of the great sea:
flood comes to it after its ebb;
as for me, I expect
no flood after ebb to come to me.

Today there is scarcely
a dwelling-place I could recognize;
what was in flood
is all ebbing.